Honeybees are dying off at an alarming rate. It doesn't take much effort to research just how important the role of honeybees are in our world. The plight of the honey bee is not one that should be taken lightly. In the past few decades, the population of bees in the U.S. has declined steadily by 30 percent each year. At this rate, the days of the bee are becoming … well, literally numbered.

Researchers have grappled with understanding what exactly is causing the decline in the bee population and at the same time, we have been forced to face the reality of what the loss of the bee means for the large, global ecosystem. You see, like many other species, the bee plays a vital role in keeping the balance between other species and their environment. In the case of bees and humans, these little insects are largely responsible for regulating our food supply.

Why do Humans Need Bees? 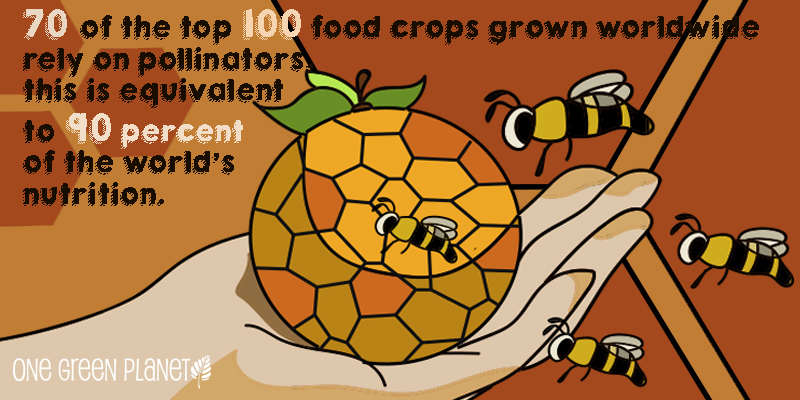 A study published in Nature Communications found that just two percent of wild bee species contributes 80 percent of the crop pollination visits observed globally. This means that if this small percentage of bees disappears … then 80 percent of our agricultural system will collapse.

Seventy of the top 100 food crops grown worldwide rely on pollinators, this is equivalent to 90 percent of the world’s nutrition. It might sound unbelievable, but without bees we can say goodbye to food such as apples, almonds, oranges and avocados. Considering that around 850 million people across the world are currently suffering from lack of food, coupled with the fact that the global population is set to balloon up to nine billion by 2050, we’re going to need all bees on deck if we hope to avoid mass food scarcity.

While this is arguably the most pressing impact of the loss of bees, there are also very real economic consequences that follow.
This same study was able to value bees in regards to their value to our economy and researchers concluded that bees contribute around $3,250 to crop production per hectare per year. To put that in context, the UN Food and Agriculture Organization estimates that 1.4 billion hectares of land across the world is currently being cultivated for crops. That equals out to being around $4.2 trillion added to the global economy, all thanks to little bees.

How Bees Contribute to the Ecosystem.

Bees are not only extremely important for humans, but also for entire ecosystems to function. As we know, bees allow plants to reproduce through pollination. These plants contribute to the food system by feeding animals – aside from humans – such as birds and insects. If the food source for these animals was diminished or lost completely, it would cause the entire food chain to suffer.

Additionally, about 80 percent of flower plants depend on pollination. If this process stops, not only do we have the potential to lose beautiful plants, but also food for us, birds, squirrels and all of the other animals that depend on plants for food.

Why are Bees at Risk?

There are a variety of threats facing the bee population, including habitat loss and climate change, but the most pressing threat to bees is pesticides. Ironically, humans spray pesticides on crops to protect them from pests that could harm their productivity, but these chemicals are also responsible for killing bees which make many of these same crops possible. Neonicotinoids are some of the most harmful pesticides to bees as they function by attacking the insect’s nervous system which can lead to instantaneous death, but also bees that do survive exposure can become disoriented and forget how to find their way back to the hive – hence, Colony Collapse Disorder. The good news is that this class of pesticide has already been banned in the European Union and many stores in the U.S. are opting to remove them from their shelves for the bees. There is still a long way to go before neonicotinoids are no longer a threat to bees, but progress is certainly being made.

How Can You Help?

There are many ways you can help bees in your own community, such as:

At Huckle Bee Farm, we realize the importance of all the pollinators, not just the honey bees. Raising the level of awareness for our friends, families, and customers is very important to us. We welcome everyone who comes to our farm to learn of ways to help. We have also partnered with a bee removal company from Dallas to provide bee removal services. If it's a swarm local to our farm, give us a call as we may be able to come lend a hand and try to save the bees. Do not accept extermination as the only solution for bee removals. While there may be times where there is no choice, our experience has been that the bees can be removed and relocated. Give us a call should you need help with this or any other issues, we'd love to help.